Christian and I met Oscar in June of 2011. One of our cats, Cassady, was nineteen years old and ill, so we took him to our veterinarian, Dr. C. W. Schaubhut. We were at the office near closing on a Friday and the kennels were opened so that The Doc and his wife, Julia, could take the rescue dogs that were there home to their shelter upstate. A crew of eight pups came running into the waiting area, and Oscar was in the middle of the pack, no wheelchair or drag bag, just a little paralyzed guy bouncing and playing with his tongue out and a great big smile. We were blown away, and I remember thinking "I'll never complain about anything ever again." We asked about him and learned that Oscar had been abandoned, already paralyzed, on Delancey Street under the Williamsburg Bridge on New York's Lower East Side, coincidently just a few blocks from our home. NYCACC picked him up, but they were going to euthanize him after only a week before Julia stepped in and saved him.

The Doc and Julia brought him to a neurosurgeon for testing and he was found to have a serious spinal fracture that was only three or four months old. Oscar was seven or eight at the time so he must have had a whole life with another family and then been abandoned after his injury. We couldn't get over his spirit in the face of adversity, but first we had Cassady to care for. We took him to that same neurosurgeon a few days later and had three hours to fill while he was in an MRI. We went for lunch and really took our time. At some point during the meal we each admitted to the other we'd been Googling "dog wheelchair" and wondering what it would be like if we adopted Oscar. Once we saw we were thinking the same thing we knew we would. We brought him home with the understanding that we'd bring him back temporarily if his energy was too much for Cassady, who's face had partially atrophied and wouldn't stay clean. He'd swat us away when we tried to clean him with our clumsy human hands, but Oscar was immediately drawn to him and kept him clean and comforted for the remaining weeks of his life.

Since then Oscar's been a source of inspiration to us and so many people around the world. We're constantly told how lucky he is that we care for him but we are, without question, the lucky ones. He's changed our lives in ways we never imagined. You can follow Oscar's adventures with his adopted pup sister, Tiki, and numerous rescued cats and birds at @oxdad on Instagram and Facebook.com/OscarMadisonNYC. 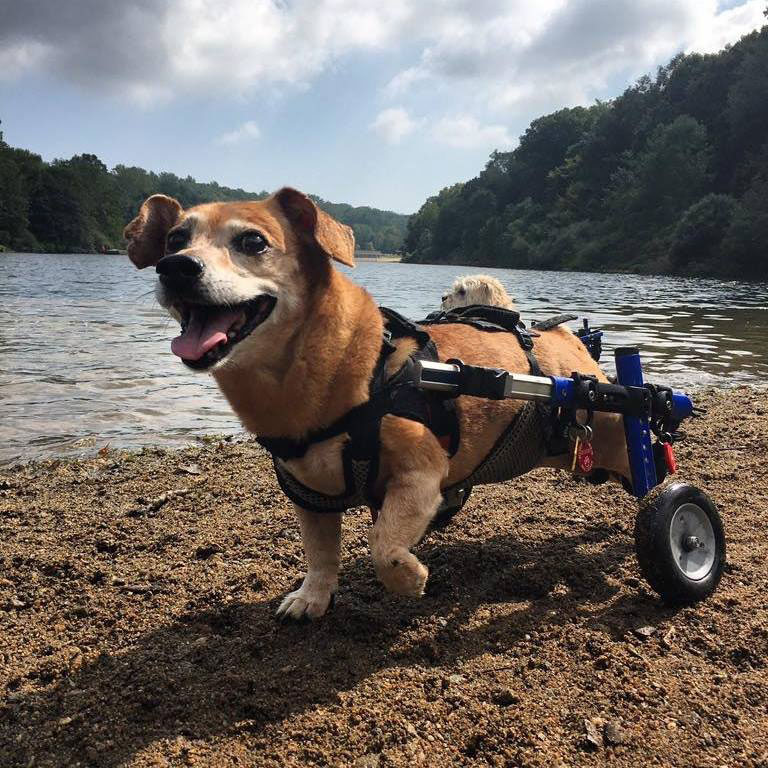