The first night I slept next to his welping pen and watched him and cried just thinking how can I care for this little guy. I knew there was no way I would let anyone have him. They may get sick of him and bring him to a shelter, not care for him like he needed. I knew he was mine and I would do anything I could for him.

I was put in contact with Olivia Kong (Daffodils mom), and Patrice Brennan (Pee-Wees mom). They told me to make sure he was eating enough and gaining weight and later how to do play therapy and physical therapy to strengthen his upper body and back legs so he could get around until he got his cart. But in the year I have had him he has thrived and has taught me that even though he can't do things like the other dogs, he can still achieve his goal but in a different way.. kinda like the common core way.. the Nico way.

I would baby him and do things for him but he stopped me from doing that because he would want to do it himself just like any little boy growing. It may take him a while to figure out how to do it, he fumbles sometimes but he never fails bc he doesn't give up. He has more heart, more drive and more character than most humans I know.

He has his own page Nicos Speedway and has over 800 friends who are all over the world. He is just like any other pup just looks different. He does the same as any other dog. He plays with his toys and the other dogs, his favorite toys are his poop emojis, favorite color is light robins egg blue, his favorite food is popcorn and pepperoni, his favorite show is Bob's Burgers, he has a girlfriend Daffodil who lives in Colorado and is just like him. He hates baths just like other pups.

At first I thought this was God's cruel joke because he was born on April fools day but now I know God gave me a gift. Nico has changed me for the better. He has educated everyone we meet in public. At first people give him weird looks and ask alot of questions but just like he did with me he makes people fall in love with him and ends up having every one wrapped around his little nubs. He is a happy, healthy, energetic little boy. He was just born a little different but to him he doesn’t think he's different. He doesn't know anything else. He isn't just my dog but he's my son, my angel face, my gift from God and I thank God every day for blessing me with my Nico Matthew. 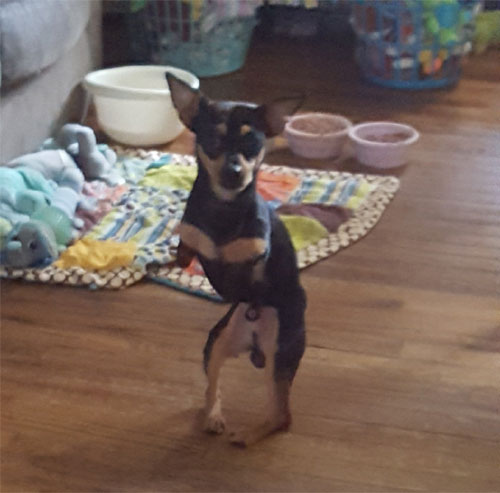