Milo is a sweet, loving boy that only wants to belong to someone. He came from a
situation that was not great. Somehow he hurt his back and couldn’t walk. His human mom took him to the vet and was told to keep him on cage rest and give him his pain meds from the prescription she was given. She never filled the prescription. He cried in pain. She let her one year old drag him around by his back legs. He did spend time in a cage but only when she didn’t want to have him crying all over the house. And still he loved her.

Animal control was called and they told her to find him a home or they would be back. Why they didn’t take him I will never know.

Thankfully she called our rescue and arrangements were made to pick Milo up, though she wouldn’t meet us at her house. He was pretty scared on the transport but once we were home he settled in with his doggy friends and good food and cuddles.

He loves to eat!  He bounces up and down waiting for me to finish dishing up everyone’s food. We feed him separate because he tries to steal everyone else’s food!  He’s not aggressive, just thinks they should be happy to share with him.  Milo likes to play with the others and would need a dog buddy to play with. He loves to cuddle on the couch - in fact insists on it.

Milo doesn’t care about cats and would probably be fine with kids that didn’t drag him around!

Milo has a little separation anxiety but it’s gotten much better. Now he whines in the crate for a few minutes then he relaxes. I put him in a crate when I leave the house and I have a camera I can watch him on. He may not be able to walk but he did open my bi-fold door and end up on the landing three steps down. He has no idea he can’t walk. Milo has had all of his vetting, acupuncture, chiropractic and he’s had 11 water therapy sessions. He can wobble walk and will some stand frequently. He does have a cart for outings but in the house usually just runs around or wears a “drag bag” so he doesn’t get boo boo’s on his legs in the yard.

He sleeps in a doggy bed on the floor covered with a blanket as do his foster handicapped brothers. Sometimes they end up cuddling in one bed.

Milo must be expressed to go potty. Bladder for sure and bowels if you don’t want to be surprised. As long as he’s fed a decent diet its not messy at all and it’s easy to learn. He wears belly bands just in case he leaks, which he frequently does. He comes with his belly band wardrobe and a few manly underpants.

Milo is a 4 year old, smooth red dachshund. Good natured and loving but he will bark at the mailman and anyone that should venture into your home until he decides they’re not going to hurt anyone. Typical dachshund.

Can you be his person? Need a cuddly dog on these chilly winter nights? He’s your man! He’s living in NE Ohio so he has his cuddling down really good! If you are interested in Milo please go to the Sophia's Grace Foundation website, click on the "Adopt" page to fill out an application for him.  Foster mom can be reached at phlmt@me.com 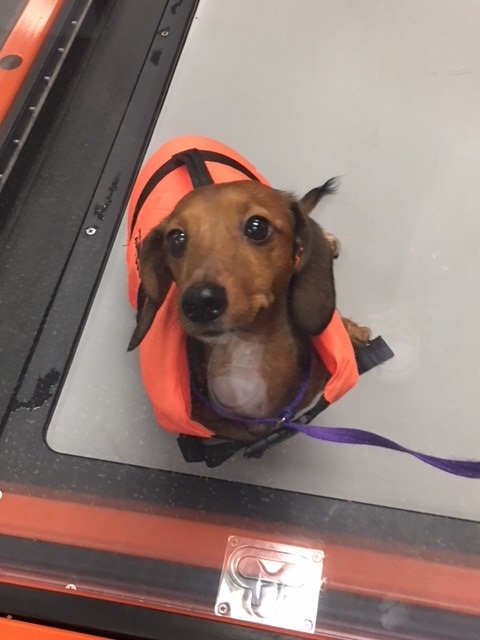