I adopted Koda when he was 7 weeks old in March 2017. It was love at first sight. He is a German Shepherd/Boxer mix and was the cutest one of his litter with his little white paws. We instantly bonded and he followed me everywhere. I took him on trips with me, we went through puppy classes, and he was the perfect dog.

When he was six months old, he was playing with another dog in a large field and was chasing the other dog around. That dog started to run the length of the field and then around the bend on to the road with Koda behind him. When we reached them, Koda was lying on the ground and had been hit by a car. He was still breathing, but was bleeding and his body was stiff. We rushed him to an emergency hospital, where he slipped into a coma. The doctor told us that he had just a 5% chance of coming out of the coma and even then, he might not be mentally “there.” They suggest euthanization. We said no. That night, we got a call that he started to blink his eyes again and was slowly becoming responsive.

In the morning, he was responsive enough for us to transport him to a larger, specialty hospital. He was evaluated there and we got great news- he was okay and after a few days recovery and a surgery, he would be just like before. We were so relieved-but it didn’t last long. We got a call that night that some things were going wrong and that he didn’t seem to have any feeling in his back legs. That night he had a blood transfusion. The neurologist visited him the next day and said his injury left him paralyzed and that his injury was pretty high up on his spine. At this point, he was still on oxygen and one of his legs was swelling a lot. They suggest that we euthanize him before he was in too much pain and told us he wouldn’t have any kind of life if we kept him.

We decided to wait a few days to see how things went. The next day, he was off oxygen and the swelling went down. They suggested that we take him somewhere else for a second opinion so we drove him a few hours away to the Ohio State Vet facility. There they initially suggested several surgeries to fix some fractures in his legs, but then decided against it because he couldn’t feel any pain from the paralysis and they didn’t want to put him under stress if the surgeries wouldn’t matter for him. He stayed there for a few days while we talked about how to give him a happy life. They also warned us that he might never adjust to his new life and that it would be a great burden on us to take care of him. Evenso we set to bring him home, but a fever put him back in the hospital for another day. Then finally, we brought our little guy home.

He is the most amazing dog we could have asked for. The doctors were worried that he wouldn’t be happy at home if he couldn’t walk or run, but he showed them. His mood has always been fantastic since we brought him back home to the surprise of his doctors. He still loves to play with his toys, cuddle, and beg for food. We started taking him on walks with a harness to hold up his back end and it was off to the races. He wanted to run down the road and play. About two weeks ago, we adopted his brother, Copper, from a family who no longer wanted him, and Koda loves to play around with him. They play with toys together, which mostly involves Koda crawling over to steal whatever Copper has, and they love to wrestle.

He’s also gotten his first wheelchair and loves to go on walks with Copper. He amazes me every single day as he learns how to do the things he once did easily in a new way. His positivity and perseverance are infectious. Everyone who meets him tells us how lucky he is to have us, but we are the lucky ones. It isn’t a burden at all to take care of him—it’s a blessing. We are so thankful every day that we still have him and will do whatever he needs to have happy life. Our lives are just like before his accident- some of the activities have changed, but our adventures and love haven’t. 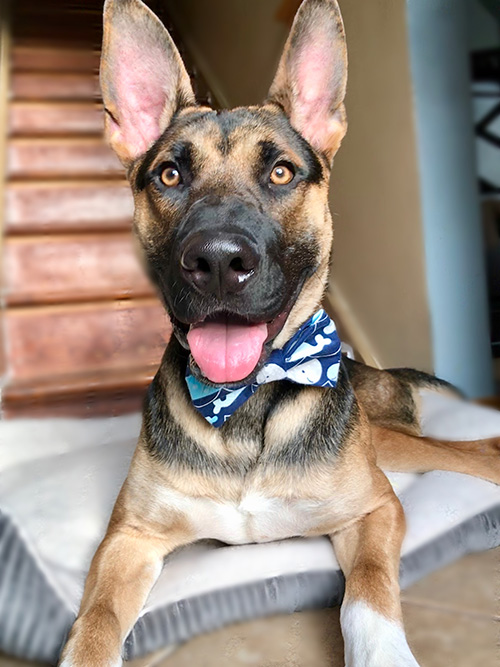